Cyberpunk 2077 hands-on: Night City is a playground of customization and player choice | Blogdot.tv

My time in Cyberpunk 2077 begins with a broken nose. Staring back at me in the grimy mirror of a seedy neon-lit bar is my customized mercenary V, and her nose is gonna need resetting. I have the choice to take an offered shot to ease the pain, or just get it over with, quick but painful. It’s the first of many choices I’ll make across my four-hour prologue playthrough, both physically and otherwise, to help V begin building her legacy in Night City.

Cyberpunk 2077 is a first-person, open-world RPG set in a not-too-distant future where the world runs on power, glamour, and most importantly, cybernetic modifications. RPGs usually have some level of customization, but in Cyberpunk it is an essential feature for navigating Night City’s darkest corners.

Before the game truly begins, I went hands-on with the character creator — and the level of detail available is staggering. Regardless of base body type, I could choose for V to have either a masculine or feminine voice, and adjust granular features like cybernetic markings, tattoos, and individual body features (including some that are too private to mention here). It’s impressively diverse, and these options feel natural in a world so focused on individuality. 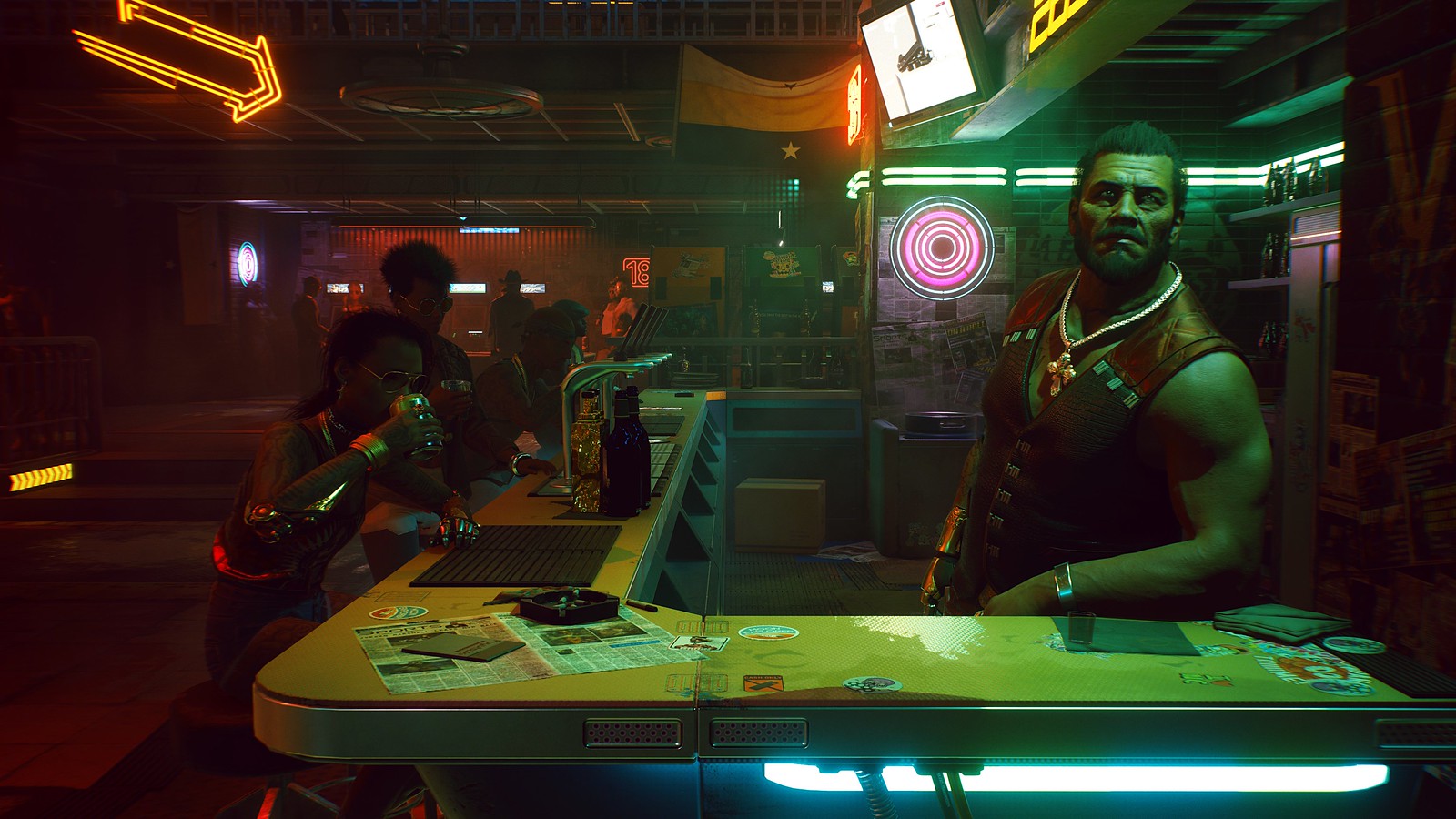 My V gets her broken-nosed start because I selected the Street Kid lifepath, one of three set backstories (other options include Nomad and Corpo) that affect how V’s journey begins and affords her a unique perspective while interacting with Night City’s denizens.

Once the game begins, the ceaseless allure of cybernetic modifications open up new pathways to glory. Levelling up granted me access to sprawling perk trees that could increase my hacking capabilities or brute strength, while Cyberware allowed me to modify V’s body with active weaponry or more passive buffs that could change the course of my playthrough.

One of my first mods allowed me to hack into tech and send a Ping, alerting me to enemy and camera positions throughout the room, and becoming essential to my stealth arsenal. Monowire installed wire-like whips into V’s arms, allowing for intense melee attacks. Each new mod becomes a seamless extension of V, and maximizes her potential across encounters. 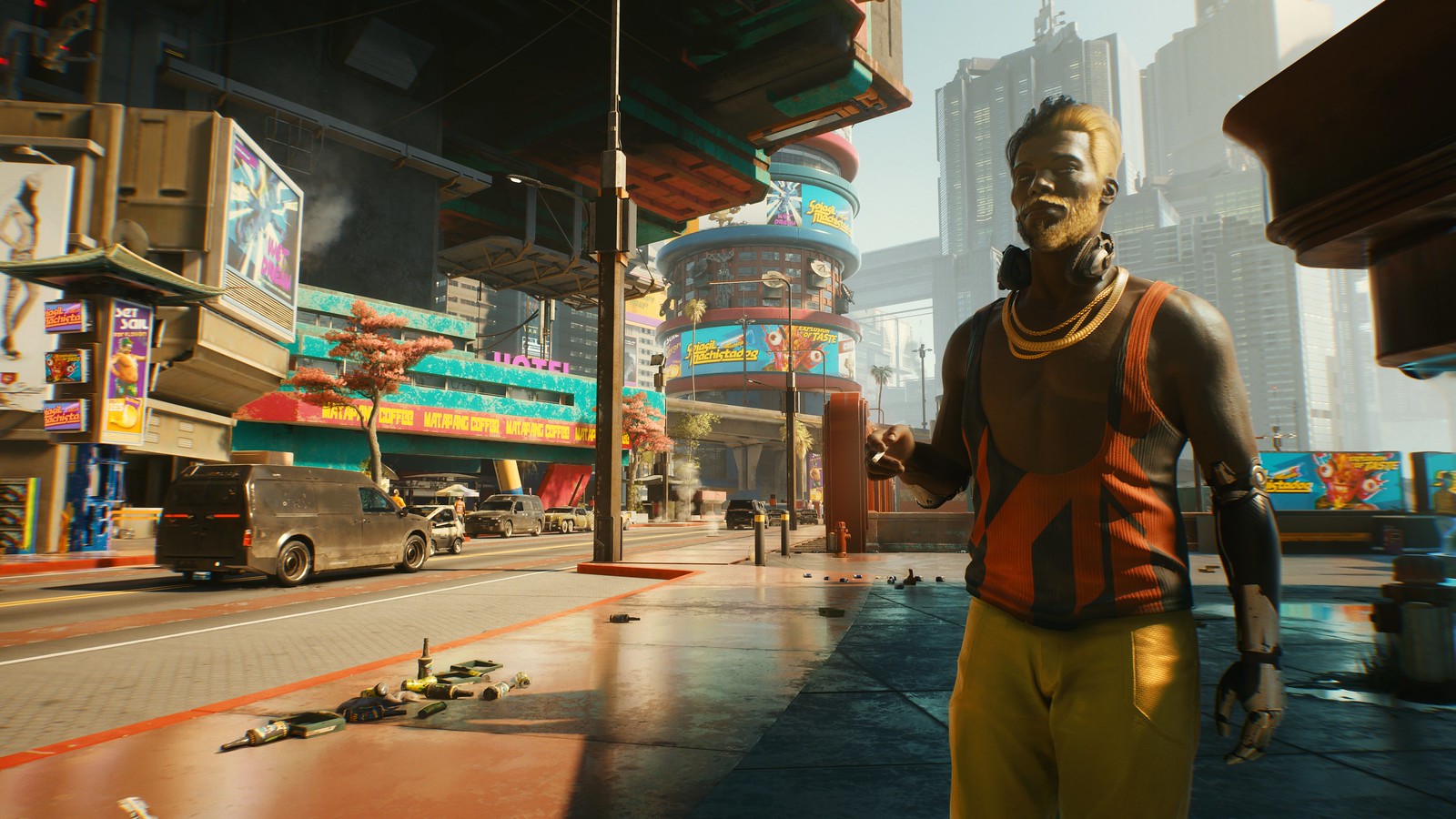 V will need all the help she can get while navigating Night City’s various threats. The city is split into districts, each with distinct styles and factions ranging from wastelanders working to pull themselves out of poverty, to stylish anarchist street gangs, and corrupt but tech-heavy megacorporation shills.

V meets characters from each walk of life, with dialogue and quest choices determining whether they stay friendly or become foes. Quests can branch off in multiple directions, and violence is not always the answer.

In one mission, I bargained with the more-machine-than-man Maelstrom gang to obtain a powerful drone. I chose to attack their leader and steal the weapon, which resulted in me wading through a heavily guarded warehouse to escape. In a second playthrough I could have won over the Maelstroms, but then been double-crossed by my financiers, the Militech corporation. In yet another version, I could have put my own money forward and brokered the deal with zero conflict. 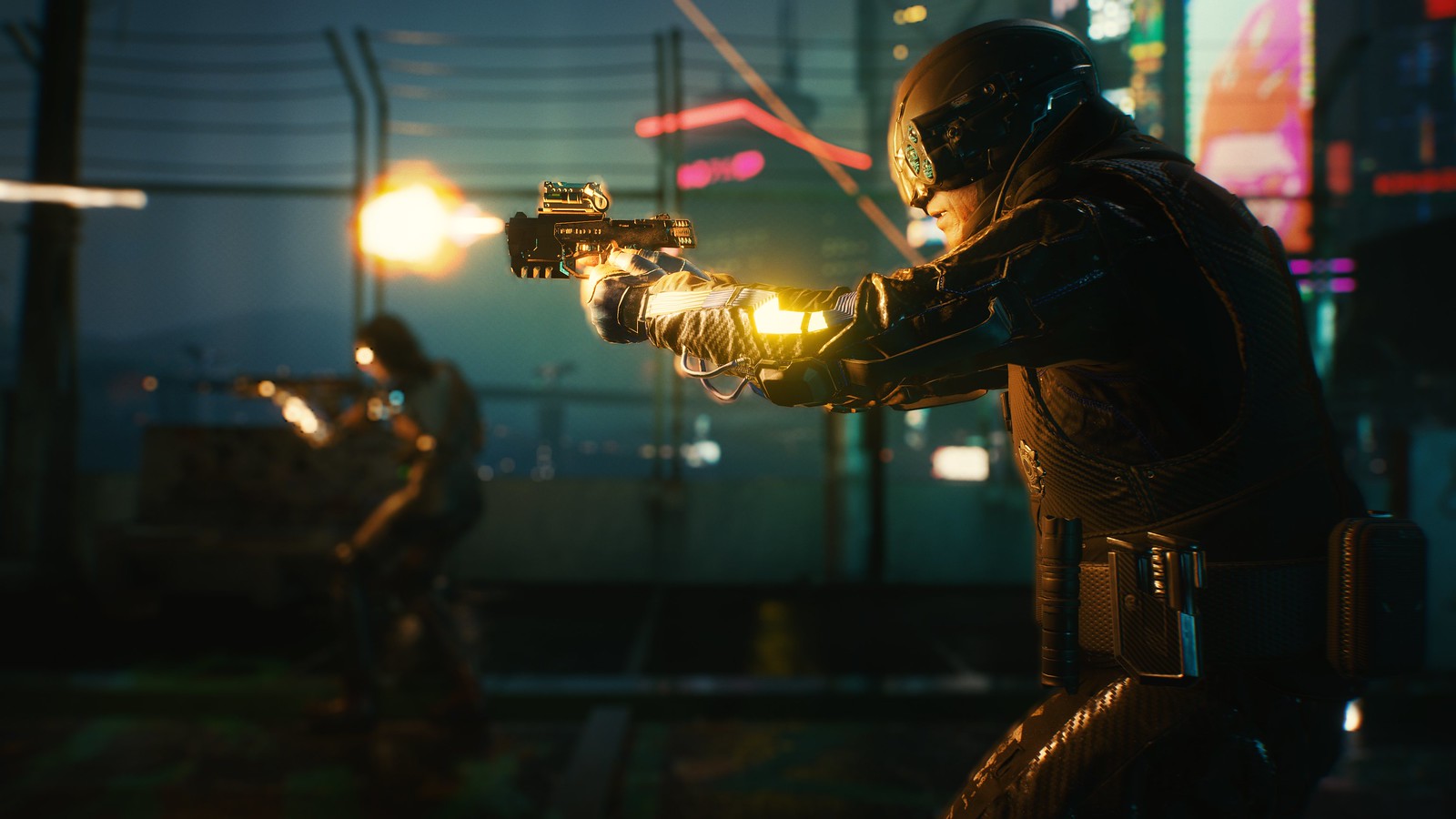 Sometimes the game let me pause to consider the weight of each reply, but some decisions have a limited response time, where gut instinct takes over.

Once conflict becomes necessary, Cyberpunk offers multiple paths to victory depending on chosen skill sets. Brute force is always an option. Increasing V’s Body and Reflex skills will turn her into a tank, busting through enemy encounters with conventional firearms, electromagnetic super weapons, or even melee weapons like pipes or katanas.

I leaned into a stealthier approach, investing in the Intelligence and Cool skills (that’s right, there’s a Cool skill tree) to make hacking a breeze. V can tap into cameras to help monitor rooms, or commandeer various tech to distract enemies. More importantly, V can target enemies and install programs called “daemons” to turn their tech against her foes. I could select an unsuspecting gang member and make his weapon malfunction, or cause a grenade to explode once I had lured a group of enemies together for maximum damage.

I found myself treating new encounters like a puzzle, trying to determine the best combination of hacking and combat to clear the room, gleefully watching my plans come to fruition. 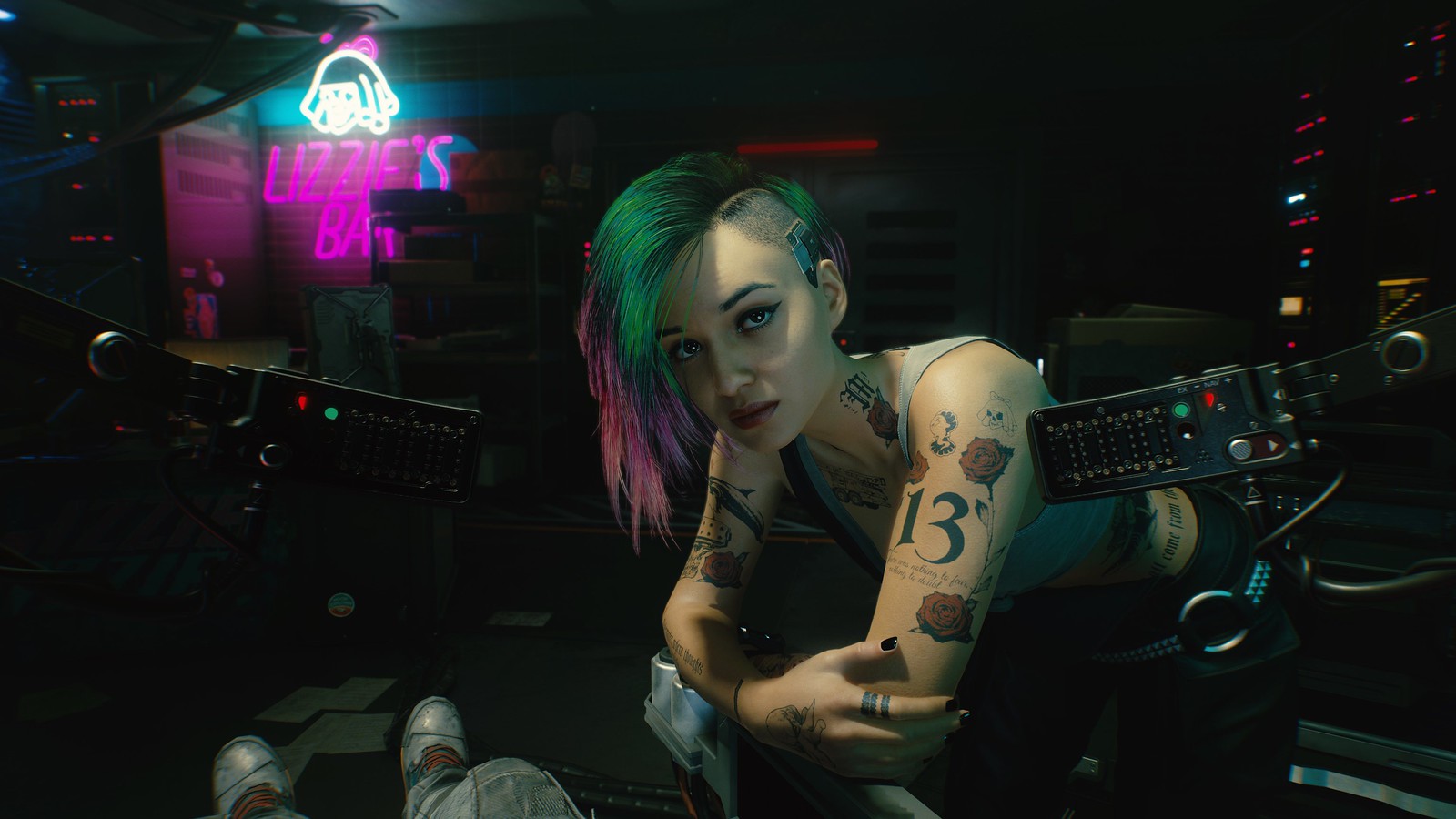 V isn’t alone in this journey. Early on, I had a run-in with a beefy thief named Jackie Welles who gets in the way of a grift. No matter which lifepath is chosen, Jackie and V eventually become allies, with Jackie providing support on occasional quests. Along my journey I met more tech-savvy co-conspirators, from the quick-witted netrunner T-Bug to the nefarious cigar-smoking Dex Deshawn.

I was especially drawn to Mox gang member Judy Alvarez, a rainbow haired tech wizard that teaches V how to navigate “braindances,” enchanting neural tech that allowed me to relive memories, scrubbing through them like video-editing software. Every new character made Night City feel more lived in, each woven into the city’s very fabric.

No character makes a bigger impression than Night City itself. Every inch feels alive, to the point that I could have spent my entire playthrough exploring its cramped alleyways, neon-lit clubs, and looming skyscrapers. 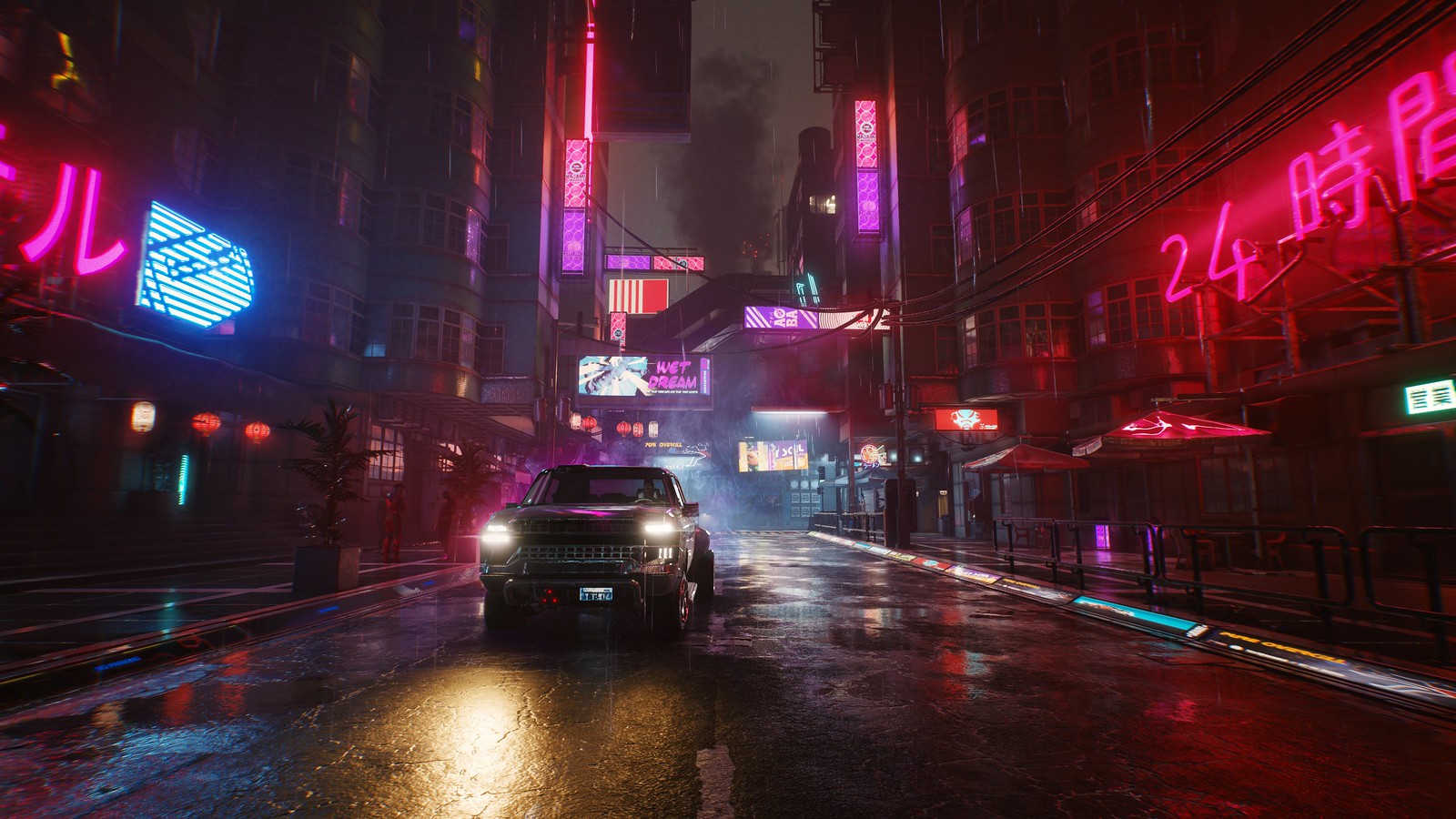 The easiest way to travel around is on wheels, but I found myself hoofing it more often so I could turn down every corner, exploring steamy alleyways, decrepit dive bars, and the occasional sinful establishment. I lost count of the amount of times I stopped to take in an advertisement, or did a double take to see a hologram flashing something titillating.

Neon City also features a surprising amount of verticality. Opening the map revealed a 3D model of the city, where you’re encouraged to follow staircases or enter basements to discover new interactions. Districts are designed with distinct flair, from kitschy pleather sofas (y’all should hear the sound design when you sit) to the sleek metal of the upper echelon. Every room is a feast for the eyes, each citizen designed with purpose and style.

The urge to explore mixed with the mind-boggling amount of customization makes Cyberpunk 2077 feel like a playground, where every choice and body modification shapes V’s world. I can’t wait to return to Night City when Cyberpunk 2077 comes to PS4 on November 19.