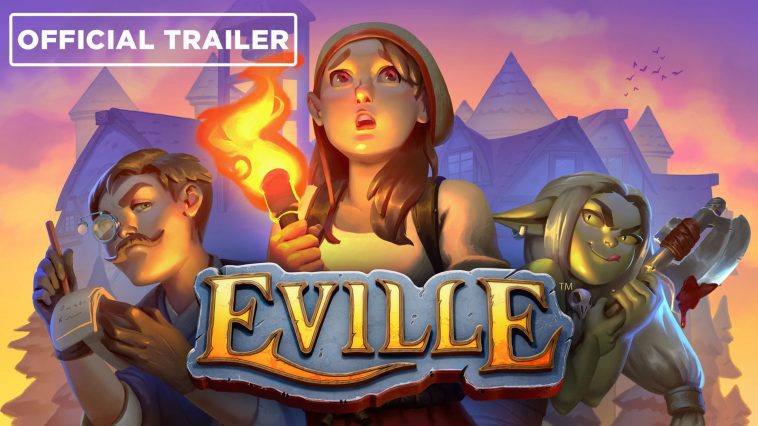 Did you catch the /twitchgaming: ID@Xbox Fall Showcase? Whether you did or not, here’s everything that was covered on the show!

You can watch a recap of the full show at Twitch.tv/twitchgaming or Twitch.tv/xbox.

One thing we added to this year’s showcase was a pre-show. Black Girl Gamers helped us warm up for the show by playing Versus Evil’s “madness” game, Eville.

Which side of the axe are you on? In Eville, a multiplayer social deduction game, play with up to 12 friends as you work together — and against each other — to either unmask the Conspirators hiding in your village … or live out your dark side as a stealthy murderer. Either way, you’ll need to rely on your social skills to stay alive! Eville is coming to Game Pass on October 11 on Xbox Series X|S, Xbox One, and PC!

We had some awesome interviews with devs for titles such as Born of Bread, Moonscars and more.

Born of Bread is light-hearted adventure game centered around exploration and a combat system that rethinks turn-based encounters’ tropes. Play as a flour golem who possesses a never-ending childlike wonder and a set of odd abilities. Team up with a colorful cast of characters, explore the different regions of a wonderful world ripe with mysteries and engage in a fun and quirky turn-based combat system.

There were some awesome games that are coming soon, available now on Game Pass, and new to Xbox such as the ones below:

Enter the world of Homestead Arcana. Become a farming Witch who pioneers, cultivates, and crafts spells to revitalize a corrupted realm in this charming exploration farming sim. Nurture your plants and push back the Miasma as you discover the mystery of its origins.

The Imperium comes and Odin calls you to war. Return to the moody, Nordic-inspired world of Song of Iron. Embrace the “Chainbreaker” name given to you by Odin. Seek out the Viking clans and free them from thralldom. Hunt down Wolfric, whose clan razed your home and killed the one you loved. Challenge any who dare block your path in the visceral, merciless, run-and-gun melee combat of Song of Iron 2.

Prove your bravery against foes new and old, including goblins, trolls, draugr, Imperium guards, and even gods. Maintain momentum during combat encounters, keeping bosses and minions at bay with constant pressure to avoid being overwhelmed. Axes will break, shields will splinter and quivers will run dry.

Navigate a dark-fantasy landscape full of old forests, swamplands, and snow-capped mountains. Sail to new locations rife with danger and secrets alike, strange Imperium facilities, ancient seals of gods, and relics of the past. The Imperium’s veil is shaken, and old magics are slipping through the cracks. Use the gift of foresight to unite the region’s clans by either convincing them of the looming threat or forcing them to follow your cause. War is coming and their strength is needed.

Chase vengeance, fight the Imperium, and unite the clans!

Turnip Boy is back! This time he’s teaming up with the fearsome Pickled Gang to plan and execute the weirdest heist of all time. Shake down hostages, steal precious valuables, battle the fuzz, and use wacky tools bought off the dark web to move further into the vaults of the Botanical Bank.

Take back the world, bring back the taste! The co-op cooking world of Let’s Cook Together 2 awaits. Follow us for updates, news, and wishlist.

During the Let’s Play sessions, we got hands on playing Ghostbusters: Spirits Unleashed, The Angler, and more.

Ghostbusters: Spirits Unleashed is a fun, multiplayer game perfect for all skill levels. Four proton pack wielding Ghostbusters attempt to catch a Ghost haunting unique locations in asymmetrical multiplayer battles (online or offline). As players progress, they will unlock cosmetics and upgrades for both Ghostbusters and Ghosts to evolve their gameplay experiences. The look and feel will deliver to fans an immersive experience in the universe, allowing them to play out their Ghostbusting fantasies. Whether hunting or haunting, the game is easy to learn and fun to master!

With great news comes great responsibility for us to share that your backlog has just grown even bigger! We are excited that these phenomenal games are coming to Game Pass – some are even available now

Rise up in a search for immortality in this strategy sim and management game based on Chinese mythology. Rebuild your sect and train new disciples through the path of cultivation. Research magic and gather mystical artifacts, face ancient dangers and other sects in your path to spiritual ascension. Amazing Cultivation Simulator is available today with PC Game Pass.

You Suck at Parking – Available now

Here’s the list of games that were shown during today’s event:

Related:
World War I First-Person Shooter Isonzo is Available Now
Prepare to Journey to Beacon Pines Where a Single Word Can Change Everything
Don’t Miss the /twitchgaming: ID@Xbox Fall Showcase