The thoughtful game structure of Jett: The Far Shore, out tomorrow | Blogdot.tv

We have lift-off: Jett: The Far Shore is out tonight on PS5 and PS4! To mark the occasion, here’s a video featuring composer scntfc’s song “Jett To Cosmodrome Z-13” to draw you in.

The connections between Jett: The Far Shore and my prior effort as director and co-creator, Superbrothers: Sword & Sworcery EP, can be felt on several levels. There are vibes in common, let’s say.

Even sworcery’s explicit segmentation – into four “sessions” – has its echo in Jett: The Far Shore. More on this below.

That said, Jett is very much its own thing, and it’s strong out of the gate.

It was evident to me, years ago, that for an unconventional and ambitious project like Jett to properly resonate, it could use a banger of a first half hour.

I figured we ought to pull out all the stops to immediately immerse the player in this new science fiction cosmos, then in short order give players some time at the Jett’s helm, all while building up a sense of how Jett’s storytelling operates on a few orders of magnitude, with enough intimacy and interiority to forge a human connection and stir people’s curiosity, coupled with enough cinematic bombast to impress.

I love how 0. Embark turned out, how it reels you in and pulls you across the stars. I hope you check it out!

Towards the end of 0. Embark, Jett’s ~30 minute prologue, Jett’s title card accompanies you to the far shore of this cosmic ocean.

Ghost of Tsushima’s creative co-lead Jason Connell at Sucker Punch, someone who knows a thing or two about title cards and who I’ve been fortunate to call a friend of late, had this to say about Jett’s title card:

“Sure, title sequences are cool but the best ones have the spirit of the game embedded into them. Jett’s title sequence contains a strong spirit. One that propels you forward with excitement and earnest curiosity about what is yet to be discovered.”

Then, prologue over, The Mother Structure securely in orbit, Jett pauses to surface an episode description, explicitly letting you know that, in order to tackle the next episode, a robust feature film length episode named “I. Deploy”, you’ll have to set aside around two hours worth of attention.

This is our first invitation for you to stop, take a breath, stew on all that has just transpired, consider the story from a few perspectives, and decide for yourself when you’re feeling ready to plunge on. 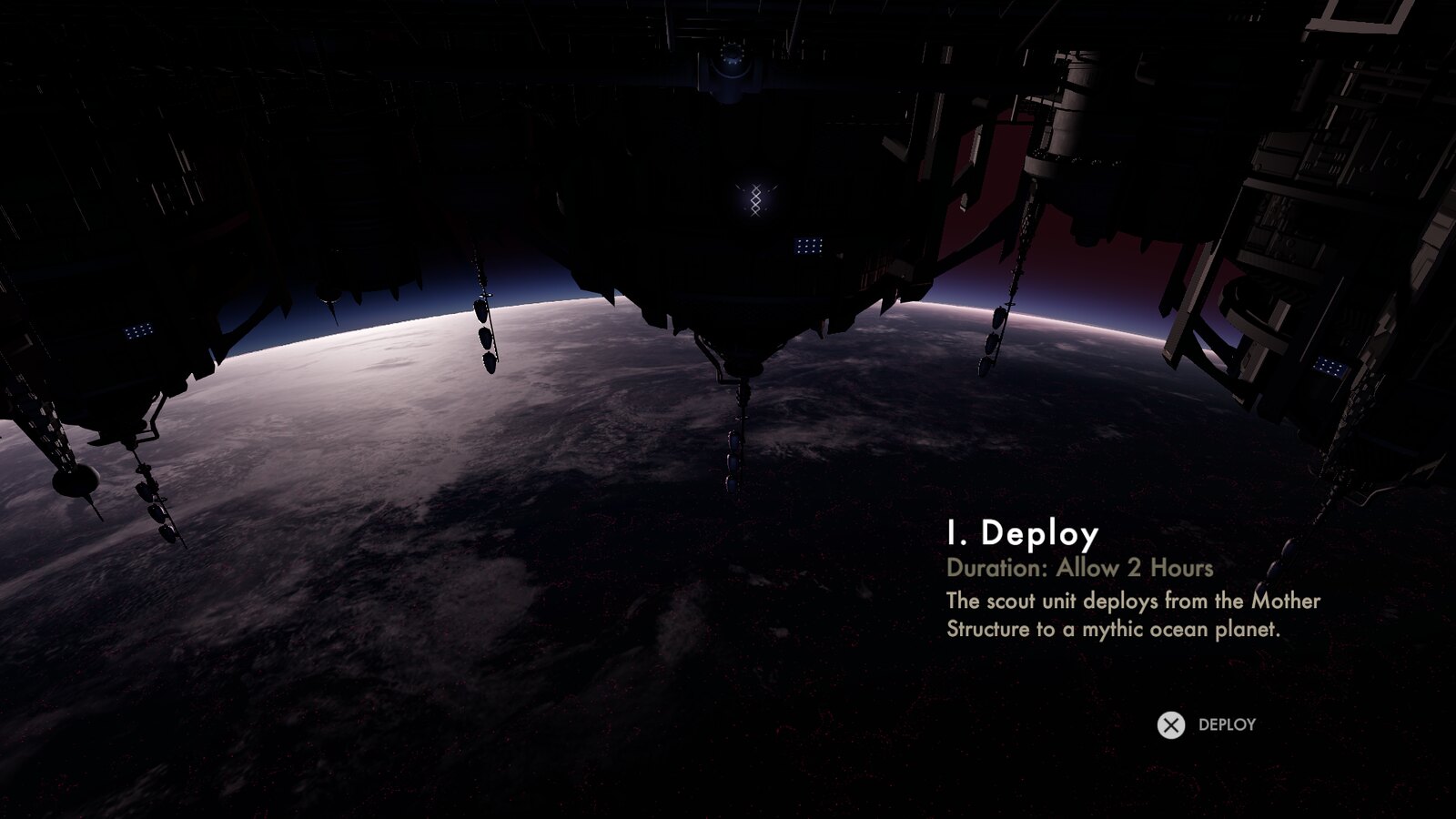 Once the clamor and grandeur and spectacle of I. Deploy subsides, there’s II. Investigate, clocking in at around an hour. It’s a brief, heady trip to Tor.

After that, you’ll likely be due for a bit of a walk and a think.

Then, having traversed those early episodes, you’ll know what Jett’s all about, and you can decide when you’re ready to tackle III. Adapt (3 hours) and finally IV. Persevere (3 hours). This is where the adventure broadens, deepens, gets a bit spicy, and finds its own particular groove for a while. 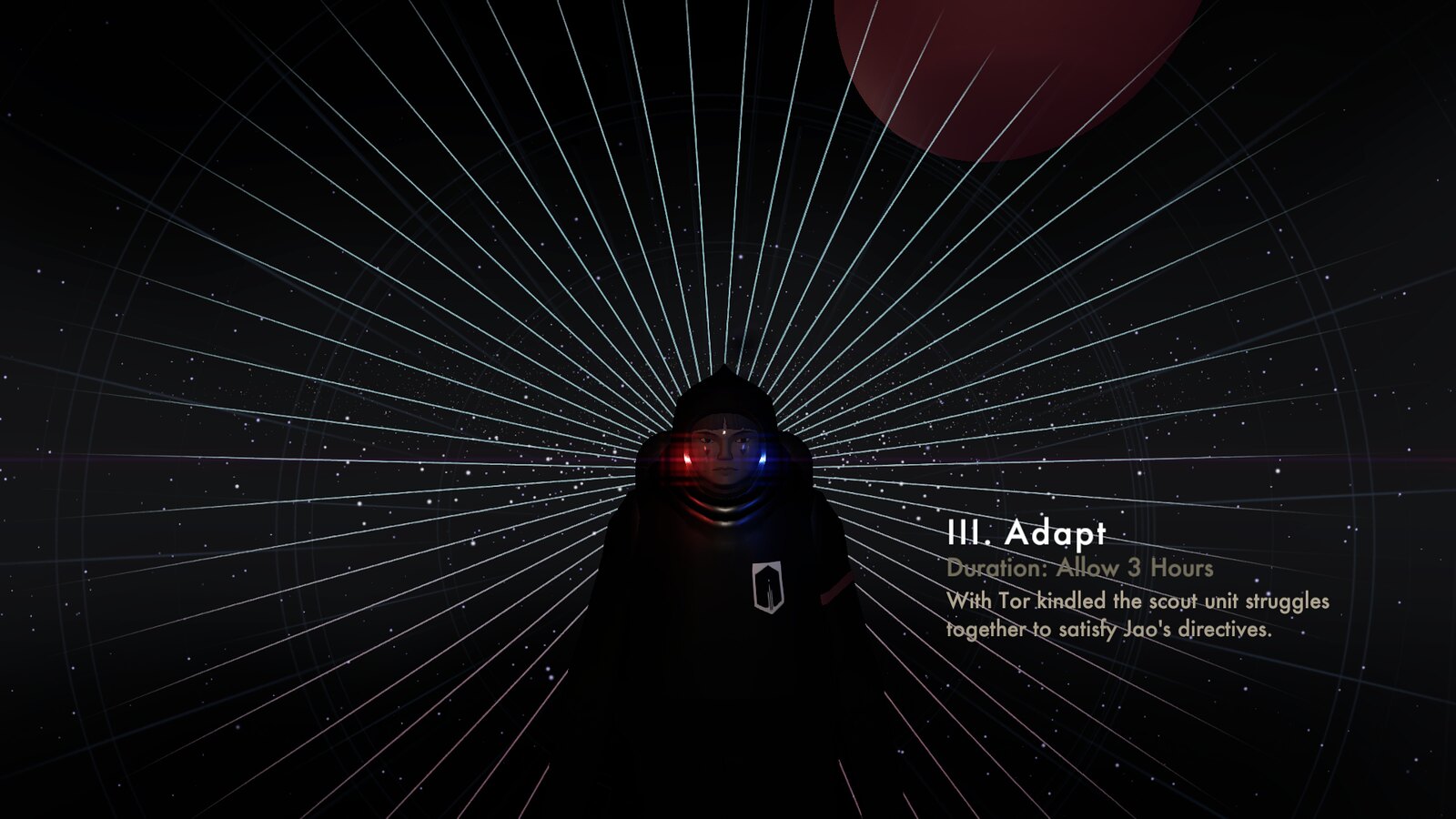 The intent with this explicit segmentation is to create a design that feels finite and traversable, for people like me who have a need to plan their leisure time. I like to know what I’m in for, and what to strive towards. I’ve grown accustomed to being able to know the length of a book or a chapter, or an episode of television, or the general duration of a film, and I tend to appreciate having this information. For some people, having a rough outline in place might let them more easily relax into the experience.

I’ll note that the above segmented design had been in place for years, so it was a positive revelation when, in 2019, we were invited to see what SIE had been cooking up with the PlayStation 5, and we learned all about Activities. Great minds, etc. 🙂

In any case, Jett’s out, we’re psyched, so please: embark with us!

More from us soon, as we’re just starting to bang the drum about Jett: The Far Shore’s Official Soundtrack, the often breathtaking symphonic score composed over long years by scntfc in collaboration with Superbrother A/V.

Jett: The Far Shore will be available tonight, October 4 at 9pm Pacific Time, and available widely on October 5.