The satellite is fixed and we have all of you to thank for it. With Season 1 soon coming to an epic finale, we can’t wait to show you what we have in store for Season 2: Satellite Scramble.

It’s going to be bigger, bolder, and even beanier than anything we’ve ever released before.

But, you’re going to need to make sure you’ve got your spacesuits because we’re heading out into the big unknown⁠ — space! Yes, the final frontier, ready for you to explore. With the Fall Guys leaving their home planet for the first time, we’ll be discovering new wonders and an in-game launch event⁠ — available now!

With the Fall Guys going galactic, we’re going to be exploring all new sights and sounds in our latest season.

From new obstacles to new courses, and all the undiscovered mysteries that space itself has to offer. Of course, that also means new Costumes, Challenges, and more goodies than we could wobble a quasar at.

No new Fall Guys season would be complete without new Rounds to get stuck into, and we think these new ones are some of our best yet!

From a leap of faith in the stars, to a tiptoeing challenge in the cosmos, to the aptly named Hex-a-Terrestrial⁠, we’re embracing our spacey surroundings and going all-in!

And those amazing new out-of-this-world levels wouldn’t be space-age fun without some new obstacles for good measure!

We’ve seen how hard some of you Xbox gamers work to unlock rewards. With our previous season showcasing our brand-new Season Pass, we had to spice it up again this time and bring in some space-y goodness! Hop in game, grab the Season Pass and play to your heart’s content to unlock some awesome gear.

For anyone who doesn’t grab the Season Pass: worry not! There will continue to be a free progression path available for you to get fun unlockables as well.

So here we go… Off into the great unknown.

What’s more, there are even more mysteries that we’ve not unveiled yet. Including some unexplained signals from… signs that life in space might not be quite as we know it. Will you go exploring to find out what lies beyond?

For all the latest Fall Guys news, including drop dates for Limited Time Events, store items and collaborations, head on over to our official Twitter, Instagram, Facebook and TikTok. Excitingly, Fall Guys is being fully localized into two new languages — Polish and Latin American Spanish — so stay tuned for accompanying social channels for those too! Never stumble alone and join the shenanigans on the official Fall Guys Discord.

See you in the cosmos, Beans! 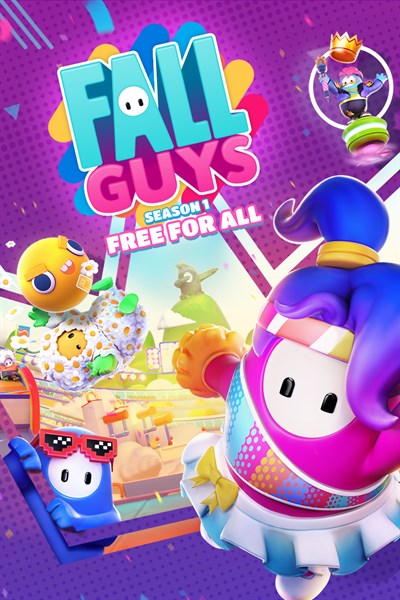 ☆☆☆☆☆ 957
★★★★★
Get it now
You’re invited to dive and dodge your way to victory in the pantheon of clumsy. Rookie or pro? Solo or partied up? Fall Guys delivers ever-evolving, high-concentrated hilarity and fun. The only thing more important than winning is looking as ridiculous as possible while doing it. Grab the silliest costume you can and fall in line—the show's about to start! Competitive & Cooperative: Tumble between competitive free-for-alls and cooperative challenges—or take on the Blunderdome with up to 3 friends! Play with Friends: Fall Guys supports cross-play, cross-platform parties and cross-progression via your Epic Games Account. Ever-Evolving Content: Play stays fresh with Limited Time Events and new game modes. Each Season brings with it new costumes, collabs, obstacles and ways to play. Gloriously Customizable: Choose from a multitude of Colors, Patterns, Costumes and Nameplates. Relish wins with voguish Celebrations and share your flair with Emotes! Items shown may require separate purchase from the in-game store and are subject to availability. Contains in-game purchases.